The Ottoman Government gave a concession to build and operate a railway from İzmir to Cassaba (now Turgutlu) on July 4, 1863. This concession was awarded to an English company "the Smyrna Cassaba Railway" (SCR) founded for this purpose by Mr. Edward Price. Price was hardly a beginner. He was among the pioneers that built railways in England and he worked with distinguished names such as Isambard Brunel and Robert Stephenson. He had also a large overseas experience ranging from tunnel construction in Marseilles to bridging the Nile and laying tracks in Brazil.

The Smyrna Cassaba Railway began construction works in 1864 and the line was completed in 1866, despite much financial difficulties. In 1866, the stock market crashed and railway shares, the SCR included collapsed. The last part of the works were financed by borrowing instead of selling shares. This placed great strain on Price finances.

In Izmir, the SCR located its terminal station- Basmane closer to the city center than ORC's Alsancak terminal. But Basmane is also to the south of Alsancak so the track going north had to cross the ORC-line going south. This crossing, known as Hilal, is done at level and at right angle became one of the most well known spot for railway photography in Turkey.

The Ottoman Government always in need of finance decided to rationalize the structure of the Smyrna Cassaba Railway. It exercised its right to purchase the concession and the part of the line it not already owned. The concession was then sold to Nagelmackers, the founder the International Sleeping Car Company on February 17, 1893. The railway operation was transferred on 12th July 1893 to a new French company, the "Société Ottomane du Chemin de fer de Smyrne-Cassaba et Prolongements" (SCP), which was founded on July 16, 1893.

Subsequently, the SCP was granted a concession to extend the line from Alaşehir to Afyon, where connection was made with the Anatolian Railway. An agreement signed in May 6, 1899 between the SCP and the CFOA as part of the negotiation for the Baghdad Railway paved the way for some co-operation. This agreement provided for:

The connection was effective in 1900 but we have no evidence of scheduled through train.

Finally the SCP won also the extension from Soma to Bandırma. This branch, completed in 1912, became the shortest route between İzmir and Istanbul thanks to a boat connection In Bandırma.

The purpose of the SCP was to carry agricultural goods from the countryside to İzmir. When the Bandırma extension was opened, through traffic from Istanbul to İzmir became possible. Additionally, the Izmir suburb part of the line proved to be an important source of revenue.

As usual, the most difficult point of the line is the ascent of the Anatolian plateau to the east of Alaşehir, between Killik and Güneyköy with gradients of 2,5%. The Bandırma line also has a difficult spot between Çukurhüseyin and Soğucak. 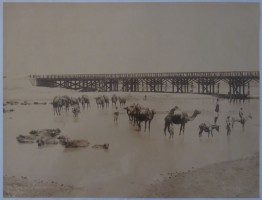 Picture of the bridge on Gediz Nehri in 1890, photo Sebah & Joaillier. Col JP Charrey
This bridge is near Manisa, on the line Manisa to Soma.
The original wood bridge was replaced by a steel bridge