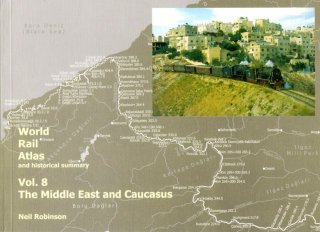 This new book is a rail atlas of Middle East and Caucasus. It covers the following countries: Armenia, Azerbaijan, Bahrain, Cyprus, Georgia, Iran, Iraq, Israel, Jordan, Kuwait, Lebanon, Oman, Palestine, Qatar, Saudi Arabia, Syria, Turkey, United Arab Emirates, Yemen. This is the first time that a rail atlas is published for most of these countries.

It has 71 highly detailed maps, generally of a scale of 1:1000000. There are also many insets of larger scale to show areas of particular interest. The maps are very well drawn and easy to read. They are not cluttered by the information usually found on common or road atlas.

The most extraordinary aspect of this atlas is the attempt to include all railway lines, including many obscure narrow gauge or industrial branches. Regarding Turkey, the maps display many military lines that had a short life during World War One, including the short pieces of track used on the Gallipoli beaches by the British army.

In addition to the maps, each country has an history description. These descriptions are in two parts:

Here below an example of a map, scanned from the book 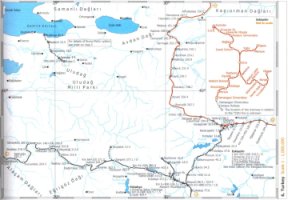 This book is sold by the author Neil Robinson as well as by good specialist stores.
hidden-email:arvyebovafba543@lnubb.pbz?