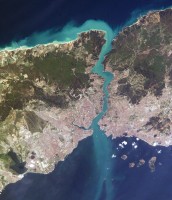 The Bosphorus is considered to be the dividing line between Europe and Asia. Its width between Sirkeci and Haydarpaşa is only 2,2 nautical miles (4 km). But the rail connection between the two sides has always been weak.

No direct passenger car between the two stations has ever been done. Loaded goods wagon as well as occasional rolling stock transfer, including locomotives, use to be transferred on barge pushed by tugs. TCDD started a proper train ferry ship with link spans on both sides only in 1958. This new installation greatly eased the transfer of loaded wagons.

The first boat in 1958, the "Demiryolu", was 74m long and was steam operated. She could travel at a top speed of 11 knots. Since then additional boats have been put into service. All the boats have three parallel straight tracks that connect to a triple track link span.

As of 2006, these boats were still in operation. Operations stopped sometime by the end of 2012 when traffic in Haydarpaşa was suspended.

Van Lake, the largest lake in Turkey, is roughly 80km wide and 120 km long. This lake is located in a mountainous area in Eastern Turkey and its average altitude is 1690m.

When the line to Van and Iran was built, it was deemed easier and cheaper to cross the lake by a ferry rather than built a line around the lake, through a mountainous terrain without a convenient pass.

Therefore, two train-ferry boats were carried over to the lake assembled locally with great difficulty. On the western side, a pier was established at Tatvan, at the end of the line of 334km from Elazıg. The eastern side pier is located in the city Van, were the railway line resumes to Iran border. The distance between the two pier is 90km. Crossing takes about 5 hours. The two additional boats, very similar to the orignal were added in 1976. These boats have been replaced in 2018 by two much bigger and more power full ferries.

This ferry line started revenue earnings operation in 1971 and still operates as of 2006. However, traffic on this international line is very much dependant of the situation of Iran and the general situation in Middle East. In 2006, there is only a weekly passenger train to Iran using the ferry.

A study done in 1993 indicated that a line around the northern shore of the lake would be 237 km with 27 tunnels for a cumulative length of 12km, the longest tunnel being 2,1 km long.