Haydarpaşa station was the head of the lines to Ankara and all destinations eastward in Turkey. Along with a passenger station, the Anatolian Railways built a very significant freight yard connected to the port, and large stabling and maintenance facilities for locomotives and rolling stock. The station was built in Kadiköy, a place across the Bosphorus from Sirkeci station. A train ferry long existed between the two stations.

The first station there was built in 1871 when the line opened to Gebze, now an Istanbul suburb. Traffic opened with a temporary wood building for the passengers. the main passenger building was restructured 3 times.

In 1872 A large stone building replaced the temporary wood one.

The first building of Haydarpaşa station was an elegant looking contruction, conposed of central building, almost square, flanked by two main wings and two secondary wings forming with a terrace roof. It was an already large contruction with 30 windows or doors on the facade.

The building was then enlarged by adding a floor on the central and on the outer most side wings. This lead to a change of the roof of the wings which now terraced.

The station suffered damages in the earthquake of 10 July 1894. It was heavily rebuilt in a somewhat smaller and more masive building, loosing the topfloor of the central part and the small secondary wings.

As the CFOA railway was extended, traffic increased and a new and larger building became needed. Its construction started in 1906 by Otto Ritter and Helmut Conu, two German architects who choose a neo-classic German style. They designed a large building, much in accordance with the ambitions of the German investors that were building the Baghdad Railway at the time. It was put into service on 19 august 1908 and formally inaugurated of 4 November 1909, Anniversary of Sultan Mehmed V.

The building was erected on land reclaimed from the sea and is therefore surrounded by water on three sides: a unique feature for a railway station. It has a very distinctive style, definitely standing out in Istanbul. Thanks to its location, it has been very well preserved, even restored following the damages caused by a burning tanker ship in 1979. The building is best seen from the sea, by taking a boat ("vapur" in Istanbul parlance) that calls just in front if the station to cross the Bosphorus.

Istanbul Sirkeci and Haydarpaşa stations are linked by a train-ferry boat.

On 2 February 2012, the station closed to all passenger trains except the suburb service to allow for the construction of the Marmaray line under the Bosphorus. This suburb service was later suspended as well.

It is most likely that the station will never reopen to rail traffic and will be converted to some other use. Likewise, the port facility is due to be closed and transfered to another location.

This would be the final track situation before the 2012 closure. 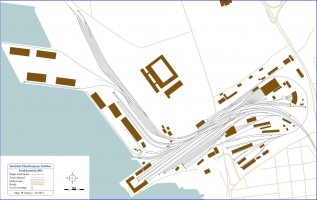