During the First World War, shortly after the battle of Sarikamis, in January 1915, the Russian Army moved into Persia and occupied Tabriz. At the same time, the broad gauge Trans-Caucasus railway was extended from Jerevan to Tabriz by the military. This move was countered by the Ottomans who used Turkish irregular troops that also crossed the border into Persia and went to harass the Russians there. However, throughout 1915, the Russians maintained their pressure until they took the city of Erzurum in February 1916. To protect their flank and to control the passes to Persia, Russian troops were deployed around Dogubayazit and Agri (Karaköse), at the foot of mount Ararat.

The Russian Army built in 1916 a military narrow gauge railway to bring food and ammunition to these troops. This line was started on the nearest point on the Transcaucasus railway: the city of Shakhakhty, west of Naxcivan, now Azerbaycan. From there, the line went straight to Maku now in Iran. Then, it followed the fairly flat valley of the Sarisu river up to Dogubayazit. 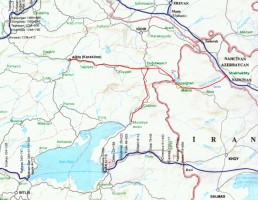 Western Turkey, the possible route is marked in red.
Existing routes are in blue

Some sources indicates that the line was possibly extended as far as Güvence, some 20 km east of Agri. The line went along the great strategic road from Dogubayazit to Agri, through the Ipek Geç pass at an altitude of 2040m, a few kilometers north of Diyadin, before going down to the Murat Nehri river (Affluent to the Euphrates river). In addition, a possible branch went south to Bargiri (Muradiye) near the Van lake.

In order to expedite the works, the Russians used 1067mm gauge equipment transferred from the Yaroslavl - Wologda - Arkhangelsk railway. To tackle the heavy gradients expected from such a military line, C'C Mallets engines were also transferred from the Yaroslavl Arkhangelsk railway. These mighty engines were produced by three different manufacturers: Borsig (Germany, 1895-97), Putilov Works (Russia, 1900-04) and Baldwin (USA, 1914). They were of similar design and characteristics and could draw 170 t trains on a 3% gradient.

The line was most probably removed quickly after the war since no local traffic in this barren area could support such an infrastructure.

The extend to which this military railway was built remains to be confirmed. Dogubayazit is one of the most remote spot of Turkey and a very unlikely destination for a railfan. However, anyone with a spirit for adventure and a taste for military (or industrial) archeology is invited to travel there and search for possible remains of the line (bridge, embankments, tracks,…) !