Except for a few locations, TCDD is a low intensity, limited speed single line network. Manual signaling is the most frequently encountered. 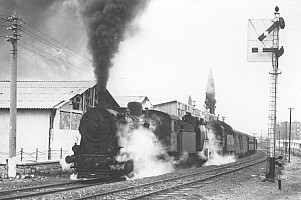 Legacy from the past: a British looking signal survived 40 years after TCDD took over from ORC. This signal protects the entrance of Kemer station, on the track going towards Alsancak. 44071+57016 heading the 09h30 Izmir to Denizli, exiting Kemer, 15 April 1976, Photo H. Stephenson.