Nusaybin is the last station on Turkish territory before the Baghdad railways enters Syrian territory. The border is crossed about 100m after the exit of the station.

The Syrian railways (CFS) built their own line from Allepo to Qamishli, Nusaybin twin city on the Syrian side. This line, which goes via Deir Ez Zor was completed in 19761. At that time, CFS replaced their old station by a much larger one located on the new line. A triangle junction was also built. Until then, the bit of CFS line from Qamishli to Tel Kochek (Iraqi border) was isulated from the rest of the CFS network.

Nusaybin has a turntable but there are no evidence of a locomotive shed. 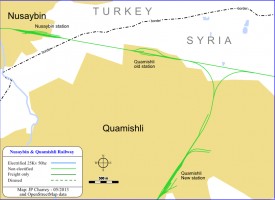 Nusaybin area, showing the border and the location of the railways stations on the Syrian side.