Due to it's late industrialization, Turkey had few insdustrial railways and industrial commodities and finished product were road hauled from the start. The most proeminents are all gathered around the coal and steel industry near Zonguldak. There, a network of meter gauge lines develloped at the end of the 19th century to carry coal from the mines down to the Black sea shore. Then standard gauge lines were laid, mostly around the mid 20th century when the steel industry was develloped in the area.

EKI manage all the coal mines in the Ereğli - Zonguldak area. Consequently, it has several industrial lines at number of sites in the coal mining area. Some of these lines are no longer in operation. See in Railway Scene 4/1969 an article by Jeremy Wiseman about coal transportation on these lines.

Turkey has a very large sugar beets productions, in many area of the country and consequently has a sugar several factories. However, the sugars beets are transported by road and these factories never had the extensive narrow gauge network often associated with this industry. At most, a small internal network and a spur to the main line can be found at theses sites. 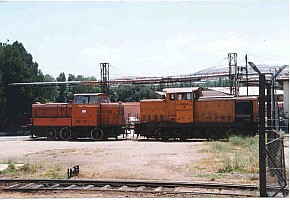