This section includes all the non-steam engines used by TCDD

Except for two engines, the last series of steam engines was delivered to Turkey in 1949, the 56300 "Skyliner" from Vulcan Foundry. Soon after, in 1953, TCDD got its first diesel engines, shunting engines from Mak. In 1955, the first electric engines from the 50 Hz group arrived under the new 25KV catenary in Istanbul. This electrification was the first suburban line ever to be in electrified in 50Hz, now a common standard. TCDD major dieselisation program occurred in the 1970's with massive delivery of DE24000.

Just like the Decapod were queens of the Turkish steam, the main line diesel fleet is almost exclusively made of CoCo. Most of the diesels are single cab, more in American style than European. Still, two engines in front plus a banking of two engines are needed to handle heavy freight trains up the heaviest gradients.

TCDD was among the first countries in the world to choose 25KV 50Hz electrification after the experiments done in France in the early 50's. It started out modestly with Istanbul suburb line on the European side (Sirkeci to Halkali). It was later extended to the suburb line on the Asian side (Haydarpasa to Gebze ant then Adapazari) as well Ankara suburbs (Sincan to Kayas). See the history page for further details.

When one looks at TCDD, it usually sees a German type railway. But suddenly, when the electrification arrived, the networks started looking very French. Indeed, TCDD purchased the 25KV, 50Hz technology in 1955 from the 50Hz group, a consortium of companies that was lead by Alsthom and Jeumont, two French companies. They brought in SNCF type catenary design and rolling stock. Subsequent electrification works were done by various contractors, but still based on SNCF' design, albeit adapted to local requirements. 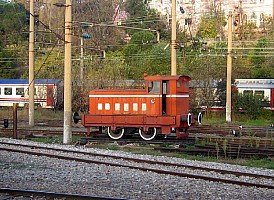