This now secondary line was once part of the Baghdad Railways. It was openned quite early in 1912, as part of the Fevzipaşa Alep Karkamış line. It presents no civil engineering difficulties, the line being nearly flat without tunnels or major bridges.

This line fell into secondary status in 1960 when TCDD opened a by-pass route to Karkamış via Gaziantep, thus avoiding entry on Syrian territory. A second blow to traffic occured in 1976 when the Syrian Railways CFS completed their own line to Nusaybin, avoiding the Turkish territory.

The line completly fell into disuse in the 1990s when the Turkish Syrian border was closed during a low point in Turkey Syria Relationship.

The line then re-openned to traffic when the border was again opened with visa free travel and a free trade agreement signed in 2004.

Again in 2011, traffic goes disrupted, this time by the events in Syria and the civil war in and around Alep. 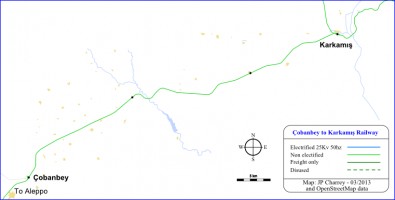