From the onset, the CFOA was intended to go eastward but the building of a line from Istanbul to Mesopotamia raised several problems. First, the financial risk appeared to big for the German banks and the CFOA to undertake alone such a venture. For this reason, a new company with a broader investor base was needed. The Deutsche Bank sought support from the British and French investors in return for a large share of the equity (30% each) in this new company.

But quickly, the project became political as well because the Great Powers were wary of a line that could have a major strategic role. The British in particular feared that this line could provide an overland access to India and put their own monopoly interests into jeopardy. They feared also that the line would reinforce the German influence in Anatolia and Mesopotamia. The German government itself gave this kind of advertisement when the Kaiser visited the Sultan to sponsor the project. Under public opinion pressure, the British government had to veto the participation of British investors in this project.

The French had a different approach: instead of withdrawing, they accepted the offer to enter in capital of the Baghdad Railway in the hope to be able the get some control over this project. They feared that the Baghdad Railway might compete with their own companies SCP and DHP. The French were also the main lenders to the Ottomans and kept a close eye on the state finance. However in order so safeguard public opinion at home, the French Government did not allow trading of the Baghdad Railway shares at the Paris stock exchange, thus very much reducing the liquidity of the trading. If the British had the same approach, one can speculate that a Franco British alliance could have taken control of the project at any point.

In 1890, the intend of the Ottoman Government and the German engineers was to reach Mesopotamia with a "northern route" Ankara Kayseri Sivas Diyarbakir. This project was set up by Wilhem von Pressel, former chief engineer of the CO. In order not to upset Russia, the Ottoman government finally favored a south route from Konya through the famous Cilician Gates to Adana. This project was much costlier than the Ankara Diyarbakir line, which was opposed by Russia, because it was too close to its southern border now in Kars. The Russian approval of this south route was only secured in 1911 at the Potsdam meeting when the Kaiser Guillaume II recognized Russia special interest in Persia.

One will note that this visionary "northern line" which is much easier that the one trough Adana was subsequently built by TCDD almost 70 years later.

Finally, the Ottoman chose to place the line outside the range of the British Navy guns. Therefore, the coastal way from Iskenderun to Alep was avoided. The line had to cross the Amanus mountains inland at the cost of expensive engineering including an 8 km tunnel between Ayran and Fevzipasa.

Since 1896 when the rails reached Konya, it took seven years of patient negotiations for the Germans to finalize all the terms of the Baghdad railway and secure its financing. Two important milestones mark these years:

Work of the first 200 km part of the line from Konya to Bulgurlu was allowed to proceed on the July 27, 1903, as per the Convention. The main contractor was again Holzmann & Co. This first section is relatively flat and straight, it was built quickly and ready for opening on the Sultan Birthday, October 25, 1904.

It has been noted at the time that both the Société Impériale Ottomane du Chemin de Fer de Baghdad and Holzmann made very little use of German expatriates. Most of the engineers and workers working on the site were of Italians, Greeks, Armenians or Turkish origin.

Difficulty in fund raising and in engineering slowed again very much the project. Work on the second 900 km part of the line, from Bulgurlu to Nusaybin was given a go ahead on 2nd June 1908. But the 1908 Young Turks revolution delayed the actual start again. The Swiss based contractors started work in December 1909. By then, the Hedjaz railway railway was substantially completed and August Heinrich Meissner, its chief engineer, was transfered to the CIOB to supervise the works.

In the mean time, the Deutsche Bank acquired in 1906 the Mersin Tarsus Adana railway. This railway served as a starting point both westward towards Bulgurlu and eastward toward the Amanus Mountains. A fourth ground breaking area was started in Alep to build the easy part across the desert. Alep was already connected to Rayak since 1906 by the standard gauge track of "Société Ottoman du Chemin de Fer Damas Hama et Prolongements" (DHP).

In 1914, at the outbreak of the war, the second part of line was almost complete except for the main tunnels across the Taurus (Cilician Gates) and the Amanus. The third part from Nusaybin to Baghdad was also started with 125 km from Sammarah to Baghdad opening in October 1914.

At this point, it must be understood that the line brought intense pressure on the British as the shortcut to India started to materialize. The line was near Mossoul and its oil reserves were already considered as a strategic asset. The line created a modern transportation mean between the two strategic areas of Anatolia and Mesopotamia. From Alep, the connection to the Hedjaz Railways through Rayak extended the reach of the Ottomans to the Suez Canal as proven when the Ottoman armies managed an attack to the Canal in January 1915. The Baghdad Railway served as a symbol of the growing influence of Germany in the Middle East and helped precipitate the First World War.

The uncompleted tunnels created big bottlenecks, hampering supplies transportation from Anatolia to the Ottoman and German armies stationed in Mesopotamia. Tunneling works were accelerated and in 1917, the 600mm gauge track that was laid for construction purpose finally came through both tunnels. It was then used across the unfinished tunnels to carry war supplies using a fleet of about one hundred engines that were supplied by Henschel from 1916 to 1918. All these engines were Bt type (0-4-0 tank), except for five E (0-10-0) fireless type. The tunnels were fully completed in 1918, a few days before the Moudros Armistice.

After the 1918 armistice, the whole line was under the British army military control. Following the November 1919 convention splitting the Ottoman Empire into interest zone, the French army moved in to occupy Cilicia and Syria and took control from the British of the trunk of the Baghdad Railway on this territory. The rest of the line remained under British Military Command, along with the CFOA. The frontier was set at Pozanti. The British kept also the part of the line near Baghdad in what will become Iraq. When the British withdrew from Anatolia on 22 February 1920, operation of the line between Konya and Pozanti was given to the Turkish Nationalists. Just like the CFOA, this part of the line was placed under Turkish military control until a Turkish government organization was created for this purpose: Les Chemins de fer d'Anatolie Baghdad.

Meanwhile, the Versailles Treaty transferred the ownership of the German shares of the Baghdad railway to the War Repair Commission, a body in charge of all German assets seized by the Allied. The buy out of these shares was done at the same time as the CFOA. 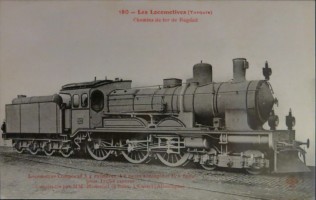 As soon as the French authorities arrived in Cilicia, they signed a temporary convention with the DHP on 15 November 1919. The DHP, a French company operating the Syrian railways, was to repair and to operate also the parts of the Baghdad railways under French control. Overall, the infrastructure was in poor condition and the DHP proceed right away with the repairs to restore a proper service. In particular, the track on the Iskederun branch, which had been lifted during the war, was relayed.

However, the line between Yenice and Pozanti was found is a very bad condition. Following an agreement between the DHP and the French command, this part of the line was not taken over.

The French and the Turkish Nationalist signed a first agreement on 9 March 1921, paving the way for a cease-fire and the evacuation in December 1921 of Cilicia by the French Army. This agreement was translated into and "Accord" (agreement) signed in Ankara on 20 October 1921. This accord had the following consequences:

The CNS was founded by a group of French banks and industrial firms, among which was the DHP. The CNS head office was 7 rue Meyerbeer, Paris. The operation offices were located in Alep.

In 1927 this French operating company CNS was renamed "Société d'exploitation des Chemins de fer Bozanti-Alep-Nissibine et Prolongements" (BANP). Despite its name, this company never operated the line between Yenice and Pozanti (see above).

In 1929, the Turkish State finally purchased all the stock of the Mersin Tarsus Adana (MTA). Following an agreement between the BANP and the Turkish state, the line Mersin to Adana was handed over to TCDD on 22 June 1929. Adana thus became the terminal station of the BANP. In exchange, the Turkish state foregone any claim on the profits made by the BANP when operating the MTA line.

Following a request from the Turkish government to find a definitive settlement for the Baghdad Railway, a new agreement was signed between the French and the Turkish states , on 27 October 1932 in Ankara.

The CD was founded in may 1933 with the assistance of the DHP. The exact term of operation of the CD were finalized with the Turkish government on 14 June 1933. The CD and the DHP signed a cooperation agreement on 27 July 1933 to coordinate their management and operations. Finally, the CD took over its lines from the BANP on 1st July 1933.

Exercising its right of repurchase, the Turkish State took over the lines Payas Toprakkale and Fevzipasa Mediankebez on 30 June 1937.

On 29 June 1939, Hatay became part of Turkey following the 23 June 1939 agreement with France. At this point, the Payas Iskenderun branch of the LSB lies fully within Turkey and loses its "raison d'être". It i was taken over on 12 August 1939 by TCDD.

The final liquidation of the Baghdad railway occurred after the WW2, nearly 40 years after it actually ceased operation. This long time is the reflect of the complicated legal situation and the numerous stakeholders involved in the deal. In 1948, the Turkish became finally owner of all the Baghdad railway tracks lying in Turkey and TCDD took over operation from the CD. The CD then was purposeless and was liquidated as well.

It is at the time of the CD that the Baghdad Railway was finally completed throughout: the missing sections in Syria (from Nusaybin to El Yaroubieh) were completed in 1935 and the final gap in Irak from El Yaroubieh to Baiji was bridged on 17 July 1940. Direct travel from Istanbul to Baghdad, using the Taurus Express became possible just as a the Second World War started.

The last word will be for the engineers that built the crossings of the Taurus and the Amanus Mountains, which are amongst the greatest feats of railway engineering in the world. Through the Cilician Gates, the line goes up from sea level at Yenice from to an altitude of 1400 m at Ulukisla in 108 km. This required 37 tunnels (cumulative length 14,4 km) and the frequent use of 2,5% gradients.

For the Amanus crossing, the steepest gradients near Ayran are 2,4 % and the line required 13 tunnels to reach the 8km Ayran - Fevzipasa tunnel.