The Turkish Republic was proclaimed on 29 October 1923 and at once it undertook to revert the economic policies of the former Empire. In accordance with the ideas prevailing at that time, the Republic chose to force the country industrialization through a state program. Accordingly, a state railway company TCDD (Türkiye Cumhuriyeti Devlet Demiryolları) was founded in 1927 to take over railway development (law 1042 of 31 May 1927). The goal of the government was thus to ensure the creation of the infrastructure required for economic development, but also for the country's defense and the unity of the territory.

To start with, TCDD took over the assets of the Chemin de fer d'Anatolie-Baghdad on 1 June 1927. This company was the repository of the CFOA and the parts of the Baghdad Railway that were still under the Turkish Republic control. TCDD took charge also of the ports built by these railways and became the largest port operator in Turkey. TCDD undertook to create or to develop new ports and to this day has seven ports:

TCDD took over the Turkish staff of the Hedjaz railway that was now in foreign land. In Ottoman time, the Hedjaz railway was the only line of the Empire to be funded by the Ottomans themselves. Therefore, apart from a few German and Italian engineers, most of the staff was Turkish. This proved to be a good source of personnel, as in the 1920's, the country had no technical school or university suitable for the training of railway engineers.

The first mission of TCDD was to expand the rail network in order to open up the country, especially towards the East and allow the transportation of resources as required by the State industrialization program. The eastward lines followed also military strategic need: during the World War I, the Turkish Army found very difficult to move troops to the eastern front to defend the border. TCDD inaugurated the Ankara Kayseri line on 29 May 1927.

Subsequently, in about 15 years, TCDD managed to double the length of railways in Anatolia. In particular, the rails reached the following cities in Eastern Turkey: Samsum, Erzurum, Dyarbakır and Kurtalan (See line opening table below). It opened also important lines to new industrial areas such as Zonguldak.

The second mission of TCDD was to buy out gradually all foreign owners of the private railway companies in Anatolia. However, capital finance was scarce and already used for line building and TCDD had to delay the purchase of these companies until the mid 1930's.

After World War II, the State shifted its infrastructure investment program from rail to road and the railway building slowed down to stop in the mid 1970's. Consequently, the network is unfinished and some important cities are still not connected (Bursa, Antalya, …). In addition, roads allow competition to build up and long distance bus is now the mass transportation of choice in Turkey.

This line was started during World War under the form of a strategic narrow gauge line as far as Irmak. During the war against Greece, this railway was prolonged to Yahşıhan (near Kirikkale) and possibly Izzetin.

The Republic officially decided the construction of a standard gauge line on 23 March 1924 (law n°499) a few days before the creation of the "Chemins de fer d'Anatolie Baghdad". The new line used much of the narrow gauge infrastructure and works proceeded quickly. The first section to Yerköy half way to Kayseri was already finished in 1925. The line reached Sivas 1930. Most of the line being through the Anatolia plateau, it presents few engineering difficulties. The cumulative length of tunnel is about 4km.

The opening of this line is a landmark in the Turkish railway history: it is the first line financed and built by the new republic. It construction was done under by subcontractors under the supervision of the Ministry of Public Works. It is also a first step into the opening of the east of the country. Finally, it the lines envisioned by Pressels that the Ottoman could not built because of external pressures. 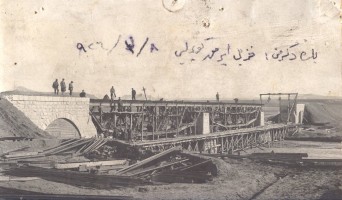 Construction of the bridge over the Kizilirmak river.

The construction of the line to Samsun was decided at the same time as the line to Sivas (Law 499, 23 March 1924). The independence war against Greece had demonstrated the importance of Black Sea ports as an alternative outlet too the Mediterranean Sea or Istanbul.

The inaugural train between Samsun and Sivas ran in 1932.

16 April 1925 law to allocate funds to the Kütahya Balıkesir line.

These two lines were decided and contracted together to the German general contractor Julius Berger in 1927. These two lines are connecting lines in the sense that they depart from and arrive in existing stations. Their main purpose is to increase railway density and better serve rich and populated area. Both lines are of little difficulty.

The Ulukişla Kayseri line has the added benefit of taking off nearly 400km from Ankara to Adana by rail. This reflects in part the growing importance of Ankara relative to Istanbul.

Since Ottoman time, Zonguldak area was the main producer of coal of Anatolia. Hence, the main goal was to carry coal inland markets without a lengthy detour by boat to Istanbul or Samsun. In addition, Karabük along the line was chosen as a location to develop a blast furnace and a steel mill. The railway was necessary to carry the raw material. The Zonguldak line was, and still is the most industrial of all TCDD network thus earning the nickname of Iron and Coal road in official propaganda.

The major part of this line, from Irmak to Hisarönü (Filyas) on the Black Sea was contracted to a consortium of Danish and Swedish companies led by the general contractor Hyquist & Holms (Nohab). The first convention between the Republic and Nohab was signed on February 7, 1927 for the building of a meter gauge line between Ankara and Ereğli. Preliminary studies revealed that a standard gauge line would be better. A new convention for a standard gauge line was signed on August 18, 1928. In order to kept the budget constant; the Government compensated the higher cost of a standard gauge line by reducing the scope of the works. Hence the Nohab order was curtailed to Hisarönü instead of Ereğli. A few years later, the line was extended to Zonguldak. Another 13km piece was built from Ereğli to Armutcuk in 1953. But the gap between Armutcuk and Zonguldak could never be plugged due to the high cost of this line.

Work was done through a difficult terrain. The line has to go across several mountains and then go down steeply to the Black Sea. Crossing of the Köroğlu mountain required a 3,5-km tunnel at Gölluce, at an altitude of 1250m. Another tunnel of 1,5km was drilled at Zonguldak. Overall, this line has 53 tunnels for a cumulative length of about 10-km.

The main purpose of this line was to transport the copper ore mined in Ergani, near Diyarbakır. It is also a major opening of eastern Anatolia.

The construction of this line was contracted to same firms as the Zonguldak line. Provisions for the Fevzipaşa Diyarbakır line were in the same convention signed on February 7, 1927.

Builders had to dig out 67 tunnels for a cumulative length of 14km and launch two major bridges. Final inauguration was in 1937. The line has to climb up to 1200m to reach Malatya and then to 1400m to go to Diyarbakır.

This line is another major opening of the Eastern Line. It plays also a major strategic role for the defense of the territory against invaders coming from Caucasia. This line serves also the iron mines located in Divriği.

Like the other lines in eastern Anatolia, these lines goes through mountains and valleys and required numerous tunneling. The area is also one of the coldest in Anatolia and construction works are all but impossible in winter time.

Like the Erzurum line, this line was meant to open up the country as far as the Iranian border. In addition, a direct link with Iran was supposed to encourage trade. But this line is also the last major railway project that TCDD could push. Also foreseen before the war, the line could only be built in the 1960's, at a time when the country was switching to car and bus transportation.

The line starts off Elazığ where it meets the Malatya Diyarbakır line. From there, the first leg to Tatvan was build quickly and ready in 1964. In Tatvan, a pier was built for of train ferry transportation across Van Lake. The ferry arrives in Van where the second leg of the line to the border. The line from Van to the Iranian Border was inaugurated on 27 September 1971 and is known as the CENTO railways (Central Treaty Organization) from the UN treaty that sponsored its building. The third leg which if the by pass of the ferry by a line around the lake is not built yet.

In addition to the above mentioned lines, TCDD built a number of junction lines

These junction lines contributed very much to created a logical network

TCDD started an electrification program in mid 1950's. At first, the suburbs of Istanbul and Ankara have been electrified in order to renovate those lines and make a modern offer to the passengers. Then, in the mid 1980's, the program moved to main line electrification, starting with the Istanbul Ankara line. The long-term goal, which is almost completed today (see table below), is an electrification of the backbone of TCDD network: from the Bulgarian border to Istanbul, Ankara, Sivas, Çetinkaya, Malatya, then down to Iskenderun.

Electrification makes sense in a country that has no petrol, but a lot of hydroelectric power. In addition, the traction requirements: heavy gradient and adverse weather make full use of electric engines high output. Indeed travel times were reduced on all energized lines. On the other hand, electrification requires a high up front capital investment to cover the cost of catenary, sub-stations and electric engines. The catenary cost is increased by the need to enlarge the numerous Turkish tunnels. This is a big drawback in a country that is precisely lacking capital finance.