This 1,4 km branch was opened by the ORC together with the Alsancak to Gaziemir main line on October 20, 1858.

The main line was built to Aydın from Gaziemir, turning Sediköy into a branch. Over time, the two villages grew to the point of being a single urban area, making the Sediköy station totaly obsolete.

This branch was closed in early 1986 when the Aydin highway was upgraded from 4 to 6 lanes. It is confirmed that this branch was in operation as late as 1977. Most of the platform is still existing. It is covered either by roads or by grass and plants. Seydiköy station is now a children playground, but still recognizable. 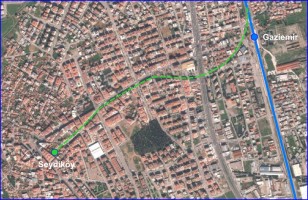 Aerial picture of Gaziemir in 2012: the line platform is still visible through the buildings. In 2006, the track was still visible in many location, beneath the pavement or the grass.