The line Izmir to Denizli was built in 1866 by the ORC. The prime purpose of this line is to serve the fertile of the Büyük Menderes river. This valley quite populated since the antiquity lies roughly 80km south of Izmir, prime outlet port in this area.

Izmir itself lies at the bottom of the gulf of the same name, The ORC choose Alsancak, a place right by the docks as a start point for their line, Then the line goes straight south, using the only possible pass between to mountains 1000m high flanking the south side of Izmir. The climb starts shortly after Kemer station to go from sea level to roughly 100m altitude, reached near Gaziemir. The climb is on average 0.5% with a max of 1.2% on a short section. Then the line goes, on average 0.5%, down again to sea level until Selcuk.

The line is double tracked and electrified as far as Cumaovası. The double track is quite old and enable the ORC and then TCDD to operate a suburban service in this area. The electrification was done in 2006 under the name IZBAN, a partnership with Izmir municipal transportation. IZBAN built 5 new stations and rebuilt the old ones to improve the suburban service.

After Selçuk lies the only real difficulty of the line : the pass over a mountain to reach the Büyük Menderes valley. The line climbs to 250m high to reach a summit tunnel just before Çamlık station. This is a average incline of 2,2% during about 10km. with a maximum of 2,8% during 6km to reach the tunnel. The descent to Ortaklar is easier with an average gradient of 1,6%. The summit tunnel was rebuilt sometime in the 1970s. The new 1km long tunnel is about 500m south west of the old one, which was also 1km long (1014m) ; the line and Çamlık station have be moved accordingly. The disused station became the site to the Çamlık Museum.

From Ortaklar to Denizli, the line takes an eastward course and follows the wide Büyük Menderes valley with no real difficulty nor gradients. There are not less than 37 stations and halts in the 161 km between Ortaklar and Denizli, and average of 4,5km between stops. Some halts are less than 2km apart, but they are usually nothing more that a stop sign, serving a village than could be several kilometers away from the line.

After Sarayköy, a last climb is required to reach Denizli, with some section as steep as 3,0%. 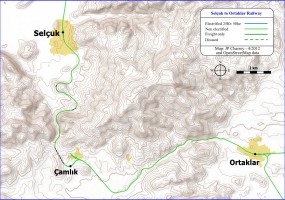