Alsancak was the terminal station of the Ottoman Railway Company. The British choose to build their station near the port,allowing for a short connection to the harbour.

The station building is in its original shape; it is quite small, yet pretty and smart. The 19th century track layout can easily been seen: two outer tracks with platforms, two inner tracks without platforms are for car storage. The main passenger room has been renovated. There are no electronic displays or other modern passenger information equipment to disgrace the nice wooden main room.

The ORC main motive power depot was located next to the station. This depot kept steam alive until quite late in the 1980s. After the end of steam, TCDD started to rationalize Izmir depots and Alsancak depot was progressively abandoned. For a while, it kept a small museum of locomotive around the turntable. This museum was then transfered to Çamlık Museum.

Alsancak station track layout was deeply transformed between 2001 and 2006 with the electrification works. The old bulding being to small for the project suburb trafic following the electrivation, it was enlarged to the east side by a new modern station. 4 new platforms serving 6 new tracks with platform were build on a spot previously occupied by freight activity. The connection to the harbour was also abandonned and a replaced by a connection from Halkapinar. The whole station was electrified in 25KV 50Hz. 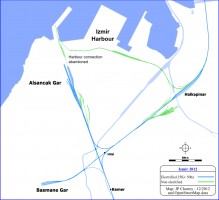 Map showing the location of Alsancak station and port