Çamlık was displaced when a new tunnel to Selçuk was bored. The old station was abonned, but the water and coaling facility was retained to be used by banking engines. It was accessible by a cord from the new station forming a triangle. This was later abandoned when the line was converted to diesel traction. The site was subsenquently transformed into the Çamlık Museum were many steam locomtovies are displayed. 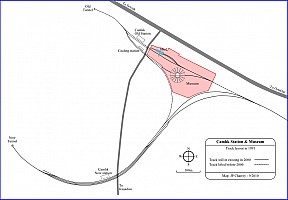