This line was opened in 1960, much later that the relative lines in the same area. The main intent were twofolds:

Although not in flat terrain, the line was built in a landscape of hills which are about 200-300m above the plateau and did not present any major engineering challenge. From Narlı, the line is parallel to the Malatya line for about 6,5km, before making a turn right to take almost southward heading to Gaziantep. At Salmanlı, 20km after Narlı, the line will have gained about 200m in altitude. From there, the line will wind around the hills and climb gently to 900m arriving in Gazitantep. 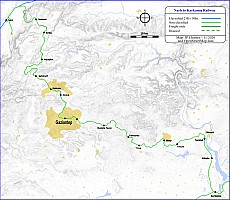