This branch on the Denizli to Dinar main line was built nearly at the same time and inaugrated only 3 month after, in December 1889. The purpose was to serve Civril, a large village. This branch was lightly built and present no major civil engineering work. It crosses an overal flat plateau, skirting at mid point the Lake Işıklı. The average altitude of this line is about 830m.

This branch never had significant traffic and was closed to traffic quite early, possibly as soon as 1988. 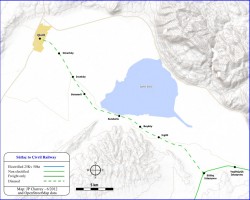 From 1953 timetable, there are 2 train pairs, one in the morning, one in the evening designed to give connection with the Izmir Afyon train. For some reason, the outbound from Sütlaç is a lot slower than the inbound, taking an additional 18 minutes to do the trip. The overall average speed is very low and it is easy to understand why the it was overtaken by buses. With no freight traffic to sustain the line, closure was only a matter of time.