Afyon is one of the few Turkish cities to have two stations:

These two stations are less than two kilometers apart and have been connected since 1900, following an 1899 agreement between the SCP and the CFOA. In the mid 1930's, TCDD took over the SCP and the ORC and opened the line Afyon to Karakuyu. Afyon became an important node on the new network. Subsequently, all traffic was handled through Ali Çetinkaya station which was enlarged and became Afyon main station. 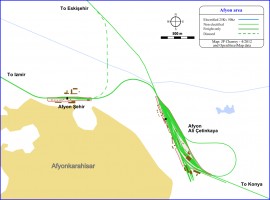 Afyon Ali Çetinkaya station building was rebuilt by TCDD and inaugurated in 18th July 1939. To make up for the fact that most of the lines enter this station on the east side, a turning loop was built to reverse the trains. Thus no shunting is required for trains from Eskişehir and going onwards to Denizli or Karakuyu.

The new building was built in a modern style. The architect's choice of brown stones and of a very flat building very much resembles Ankara station, which opened two years earlier.

Ali Çetinkaya (1878 - 1949) was an early follower of Atatürk. Both were together fighting the Italians in Cyrenaica. After heroic resistance to the Greek in 1919, he joined Atatürk in Ankara and became a Member of Parliament. He was minister of public works and of communication between 1934 and 1940 and as such was in charge of TCDD.

Afyon Şehir is about 2km away from Afyon Ali Çetinkaya. Over time, the terminal station of the SCP lost its significance and became a small station. It is still the junction point between the Dinar / Karakuyu line and the Usak line.