This branch was built in 1912 as part of the Bagdad Railway. The goal was to serve the port of Iskenderun, then also known as Alexandrette (little Alexandria). It goes through a flat coastal plain and present no major civil engineering. On the last kilometres, the line was built almost on the sea shore in order to reach Iskenderun.

In addition to the Iskenderun port, the area became heavy industrialized since the building of a major steel plant, a few kilometres before Iskenderun. Heavy iron ore traffic decided TCDD to electrify this branch with 25KV overhead catenary in 1994.

The line start to the east of Toprakkale station with a triangle junction allowing direct running both sides, where it turn south and goes mostly in straight 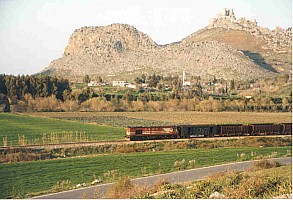