This line built by the ORC in 1910/1912. This explains why the kilometers are measured from Izmir. The ORC tried to reach Konya be could not secure the concession and were stopped in Eğirdir.

From Dinar, the line makes a big north south meander in order to climb the 100m altitude difference between Dinar and Karakuyu. The line goes south first to reach the entrance of a small pass about 5km away from Dinar station. It then makes a 180° turn to enter the pass the start the climb going. At the summit, a short tunnel allows entry on the plateau of Karakuyu which is reached about 3km after, in a very slight descend.

From Karakuyu, the line goes south through a flat plain lying at the bottom of a flat valley and crossing a swamp area. It then has to go through a small pass to reach Keçiborlu. Then again, the line is nearly flat, going south east with some long strech of straigh line, until a few kilometers before Eğirdir. There, a steep descend is required to reach Eğirdir lying next to lake of the same name. Eğirdir is nearly 100m below the altitude of the plateau. The line does large loop with an 180° horseshoe curve in order to ease the gradient. Right after the curve, a landslip required the line to be rebuilt in the 1970s on a steel viaduct. This became one of the most photogenic spot in Turkey with the lake as background. The lake itself is renowned for having a very turquoise color.

This line was cumbersome to operate: trains usually made a detour along the Isparta branch before going to Egirdir. Freight traffic was nil and passenger traffic minimal. Operation was dropped in 2003.

This line was also one on the very last in Turkey to be operated by steam, until the end of 1988. It attracted many photographers who captured the engines and well as the scenery of the steel viaduct, the horseshoe curve, the lake, the mountains. Motive power was mostly old and derelict 44001 and 55001, sometime joined by a 56501. A typical train had a single passenger car and a single, or perhaps two freight cars that could be used as baggage & guards van. 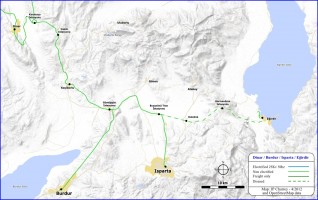 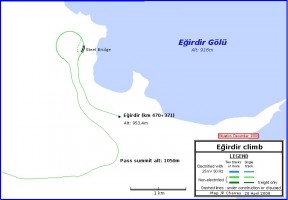 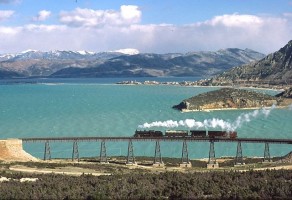